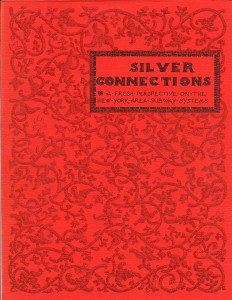 by Philip Ashforth Coppola
About two months after Volume I, first version text, was released, in August, 1984, I hauled myself to the New York Public Library Map Room, and settled in for several Saturdays on end, perusing, of all things, old un-scrolled blueprint maps from about 75 years ago. As a casual writer, I can’t think of anything more dry unless maybe financial tables than scrutinizing old blueprints of street maps. But as a researcher, those old blues were solid gold to my mind and pen. They were exactitudinally and painstakingly drawn up by Delos F. Wilcox, Chief of the Bureau of Franchise of the New York State Public Service Commission for the First District. They just don’t make bureaucracy like that any more, let me tell you the truth; civil servants who seriously believed in their title and task. Delos F. Wilcox, Esq. & Chief, took just one of Brooklyn’s historic horse or street or trolley car companies per map, and traced its route, plus annotated the map with its franchise dates(s) and history and news of its mergers, acquisitions, &/or eventual takeover. Between 1908-to-1910 he chronicled no less than 66 street transit companies of old Brooklyn, plus their subsidiaries, in this way. He even wrote up the story of the Brooklyn Bridge transit tracks (which helped with Chapter XVIII, further down the tracks). Mr. Wilcox’s labors on the evolution of Brooklyn City’s streetcar mazes formed the basis for the first chapter of my look at the BRT empire in Volume II.

Vol II, Drwng. 43By the early 1980’s I’d figured out that the street cars predated the elevated lines, and that the els predated the subways. So I had a pretty good handle on how the book should proceed. After the streetcars came the elevated companies; those friendly neighborhood Brooklyn elevated lines which were almost a part of the family. There seemed to be a cultural affinity toward Brooklyn’s system different from Manhattan’s: the Manhattan els were for New York City, the U.S.A. (even foreigners from New Jersey), and visitors from afar; Brooklyn’s els were a Brooklyn institution, its pride and bane, a part of the fabled Brooklyn transit system, whose trolleys helped name a baseball team, and whose 8 elevated lines (I’m including the Franklin Ave. and the Canarsie inclines) took its passengers to all corners of the wonderful Borough a good place to visit, a great place to live!
sw stairwayTo my mind, fate or luck is sometimes a matter of timing. When I examined the Brooklyn system in the mid-1980’s, I toured the Broadway El when its neighborhood was, in the words of today’s observers, a bombed-out war zone. Never mind, though; I visited all the stations and described the buildings along the way as I saw them, without condemnation, and I hope I wrote it up so that my readers get that “you are right there, now” (frozen in late-’80’s time, as it is) experience. The same stretch now, some 30 years later, is probably changed, many buildings razed and replaced, and a different kind of zone; kinder, I hope. I also had the chance to examine the Franklin Avenue Incline/Shuttle as it had existed since, let’s say, at least 1905, when the last remnant of the 1888 Fulton Street El still stood at the crossroads, with a Fulton Street El station house perched on its north side, and with those inimitable 1888 stairways with their totally un-20th Century porch ends leading up to the structure. The porches are gone, the house and structures are gone now, and the Franklin line has been reduced to one track; the Dean Street station is abandoned. With the renovation work of 1999-year 2000, the Franklin Avenue shuttle is still serving its public, but it is not the same as it had been for 90+ years before. But you can find the original Franklin Avenue Shuttle in my book. It’s just a matter of timing that I caught it before it was changed. My luck has helped me elsewhere, besides.

sw stairsTo my knowledge, limited as it may be, there has not been a chronicle of the Brooklyn transit like this Volume II prior to its release in 1990. Within its pages there are the aforementioned horse cars, trolleys, and elevated lines, and the characters (figuratively and literally) who made it all happen. The lines examined are the Broadway El, the Myrtle Avenue remnant, the Franklin Avenue Incline, and the Canarsie line from Broadway Junction. These are all the existing transit lines prior to the BRT’s entry into the subway game. I planned my history to stop just short of Brooklyn’s subway system. Besides the evolutionary history, the last chapter recounts the diminution of the Brooklyn elevated system; listing each segment of the lines as they disappeared, chronologically, plus the forces which did the demolition work. The coming, and passing, of the Brooklyn Bridge’s transit amenities is also revealed. Some people don’t know that the bridge ever actually had trains running across it. And, as extras, the Williamsburg Bridge’s structural woes, at that time, are examined, and a visit to the mythical Atlantic Avenue Tunnel is recounted.

All this is in Volume II: text and maps and illustrated views of Brooklyn’s transit system that we are no longer able to see and experience.